The SOLTRAIN program has been successfully built up in the last 12 years leading to positive impact across the solar thermal market in Southern Africa, and AEE INTEC will continue the SOLTRAIN success story with 9 partners in 5 Southern African countries (Botswana, Lesotho, Namibia, South Africa, Zimbabwe) while reaching out to other countries of SADC too.

Another 4 years of capacity building and demonstration will be funded by the Austrian Development Agency (ADA). The ‘+’ is reflective of the extended scope which will now include renewable heating and cooling solutions in general with focus on heat pumps and excess heat recovery in industry and commerce, hospitals, hotels and social housing. Solar thermal will still be the at the core of all activities.

Werner Weiss, often referred to as the ‘father’ of the SOLTRAIN initiative is enjoying his well-earned retirement, which will bring him back to Africa on private trips along with his family. He is succeeded by Wolfgang Gruber-Glatzl who has worked for AEE INTEC in the field of renewable energies for industrial systems for 10 years. Wolfgang will bring along his expertise in energy efficiency, excess heat and solar process heat which he has earned in projects in Europe, Asia and Africa. The hand-over was accompanied by Austrian Ambassador Romana Königsbrun, who joined the SOLTRAIN conference on 7th and 8th December 2022 in Somerset West, South Africa. 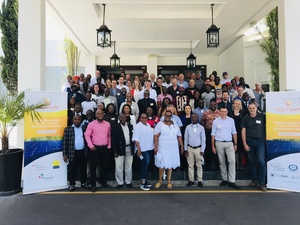