The fourth phase of the SOLTRAIN project came to a close at the SOLTRAIN conference which took place on December 7th and 8th in Somerset West, South Africa. About 120 attendees from the six SOLTRAIN partner countries - Namibia, Botswana, Zimbabwe, South Africa, Lesotho and Mozambique - as well as international experts from the IEA Solar Heating and Cooling program attended. The conference was opened by Prof. Wikus van Niekerk, Dean of Engineering at Stellenbosch University and the Austrian Ambassador Romana Königsbrun.

The results of the project, which has been running since 2009, were presented and discussed in numerous presentations. Between 2009 and 2022, around 5000 people have been trained as experts in the field of solar thermal systems in more than 200 training courses. Theoretical training was carried out in cooperation with universities, energy institutes and training centres, whilst the practically oriented training courses were handled in cooperation with vocational schools and solar technology companies. In addition, 27 students were supported with bursaries during their studies and master theses on the topic of solar thermal energy.

The knowledge acquired has been applied to 671 demonstration plants with a total installed solar collector area of 7 330 m2 corresponding to a capacity of 5.1 MWth. Of the total number of systems installed, 343 were installed in Phase IV.

The range of plants extends from small thermosiphon systems to larger solar plants for hospitals, orphanages and hotels. In addition, the first solar district heating network in Sub-Saharan Africa, numerous solar plants for industrial process heat as well as solar plants in combination with heat pumps and a PVT system were built and financially supported from Austrian development cooperation funds.

These solar thermal systems save 3.33 GWh of electricity annually and are associated with the annual avoidance of nearly 2 000 tons of CO2.

Based on roadmaps developed in stakeholder processes and lessons learned from the constructed demonstration plants, broad roll-out programs are now intended to be implemented to use solar thermal systems on a large scale.

SOLTRAIN has received numerous international awards for its training program, construction of the solar plants and the support for policy makers, including the Emirates Energy Award 2017, the Energy Globe Award 2019, and the IEA SHC Solar Award 2022. 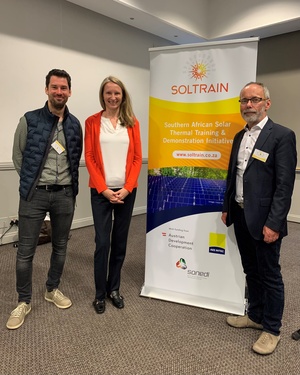